The grand shutdown has caused a 17 percent reduction in greenhouse gases, which is great. However, that means even this amazing life change still left us producing 83 percent as much greenhouse gases as in the past. Plus the predictions are that when this is over everything will bounce back to where it was before or worse as production tries to catch up with what was lost. 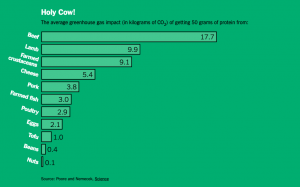 The other dilemma is that the Paris Accord says to prevent further warming, starting this year, we have to annually reduce our greenhouse gases by 7.6 percent. So if with everything stopped we got to only 17 percent, how will we get to 7.6 when everything starts up again? Using the Project Drawdown as our guide, there are actually several individual actions we can take — along with advocating for systemic changes. Some those actions will require changing behaviors to reach the 7.6 percent goal.

Perhaps the quickest personal fix for those of us who haven’t already done so is switching to a plant-rich diet. This is based on  Project Drawdown research :

Implementation of a plant-rich diet can be readily adopted even with small behavioral changes that can have a significant effect globally. In terms of cost, the solution appears to yield significant savings at the individual level, and indirectly at the national level through lower healthcare costs. Moreover, the burden of change seems highly equitable and implementable, because developing nations already consume fewer calories and do not need to shift their diets much, whereas developed nations need to address issues such as obesity.

The New York Times provides an excellent summary the effects diet has on climate change, including this:

Meat and dairy, particularly from cows, have an outsize impact, with livestock accounting for around 14.5 percent of the world’s greenhouse gases each year. That’s roughly the same amount as the emissions from all the cars, trucks, airplanes and ships combined in the world today.

In general, beef and lamb have the biggest climate footprint per gram of protein, while plant-based foods tend to have the smallest impact. Pork and chicken are somewhere in the middle.

Some choices in descending order to slow global warming are vegan (the best), vegetarian and finally flexitarian, which means mostly plant based with occasional servings of meat.

Here are the USDA figures for non-plant based consumption in the USA (these are figures adjusted for waste, which is another Drawdown item, we will deal with in later posts) :

the per capita supply of red meat, poultry, and fish/shellfish available for Americans to eat after adjusting for losses rose to 143.9 pounds in 2017. Red meat (beef, pork, veal, and lamb) accounted for 51 percent of 2017’s 143.9-pound total, compared with 42 percent for poultry (chicken and turkey) and 7 percent for fish and shellfish.

The adoption of a plant-rich diet assumes the following criteria are met:

Of course, along with the benefits to reducing global warming, eating a plant-based diet is healthier and it would remove the outsized risks — see here and here — that slaughterhouse and meatpackers face each day.