The Town of Sandwich, N.H voted to meet  “a goal of 100% reliance on renewable sources of electricity by 2030 and for all other energy needs, including heating and transportation, by 2050.” The floor vote came at the annual Town Meeting on March 11, 2020 after a robust discussion covering an array of points of view. 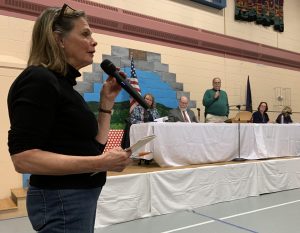 The warrant article was introduced by the ad-hoc Sandwich Climate Crisis Coalition (SCCC), which formed six months ago and now has about 60 active members. Although the  resolution is aspirational and  non-binding, Peggy Longley, a member of the SCCC steering committee, told the meeting, “We need to start planning now for a cleaner, cheaper and more efficient future with all of its environmental benefits.”

The SCCC resolution follows the lead of Plainfield, Cornish, Keene, Hanover and Concord, N.H. which already have passed similar resolutions and it also picks up on work that a Sandwich energy committee started in 2007, but later went dormant.

The entire warrant article reads:  “To see if the Town of Sandwich, NH will vote to commit to a goal of 100% reliance on renewable sources of electricity by 2030 and for all other energy needs, including heating and transportation, by 2050. The intent of this goal is to protect the well-being and health of our citizens by practicing and promoting energy conservation, ensuring food, water and heat security, by being fiscally responsible, and by keeping energy dollars in the local economy. We can, by actively shifting towards renewable energy, end dependence on and subsidies for fossil fuels and address the threat of global climate change on a local, state and national level. This article reaffirms Warrant Article 53 passed at the March 13, 2007 Sandwich Town Meeting.”

You can follow the progress of the SCCC here at SandwichClimate.com.