Mary T. Barra, the G.M. chief executive officer, tells the New York Times, “We want to get as many E.V.s on the road as possible. We believe climate change is real, and we have the ability and responsibility to create a cleaner, healthier planet.” 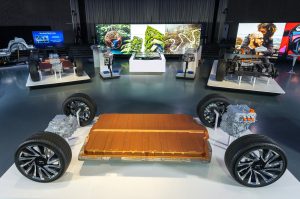 Ms. Barra said, “The company is hoping that sales of its electric vehicles in the United States and China will exceed one million a year by 2025, ”

Deloitte’s latest outlook shows “EV sales shifting from 2 million units in 2018, to 4 million in 2020, 12 million in 2025, before rising to 21 million in 2030 as the cost of manufacturing batteries falls significantly.”

It’s report adds, “the penetration of Internal Combustion Engine vehicles will start to decline with sales beginning to fall from 2024 onwards.”

So the Sandwich Climate Crisis Coalition’s goal for  the Town of Sandwich, NH of 100% reliance on renewable sources of electricity by 2030 and for all other energy needs, including heating and transportation, by 2050 continues to seem more and more doable.

Post Views: 1
This entry was posted in Climate News. Bookmark the permalink.