Posted on November 2, 2022 by Sandwich Climate 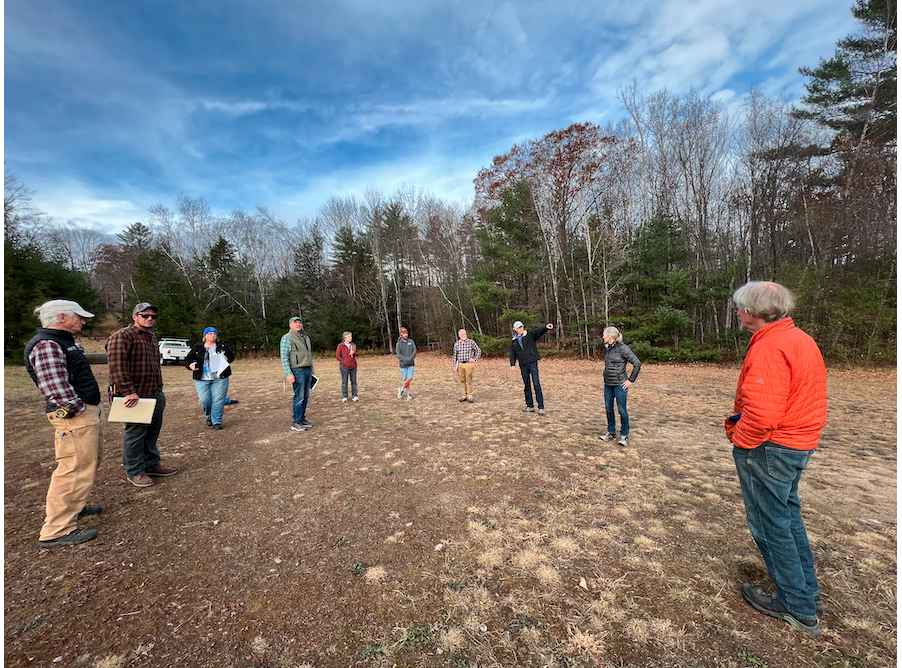 As energy prices are soaring around the globe, the Town of Sandwich, NH, took a step today to minimize costs for its municipal buildings. A few weeks ago a request for proposals (RFP) was sent out to solar installation companies. They were asked to develop formal bids for putting a solar array next to the town’s leach field adjacent to the fairgrounds on Squam Lake Road.

This morning was set aside for solar contractors to walk the property. Several companies expressed some interest in the RFP. Today one very reputable company showed up. Two selectboard members were there, a rec department representative, a representative from the fairgrounds, a couple of interested citizens and the town’s five energy committee members, who took the initiative to make this all happen. 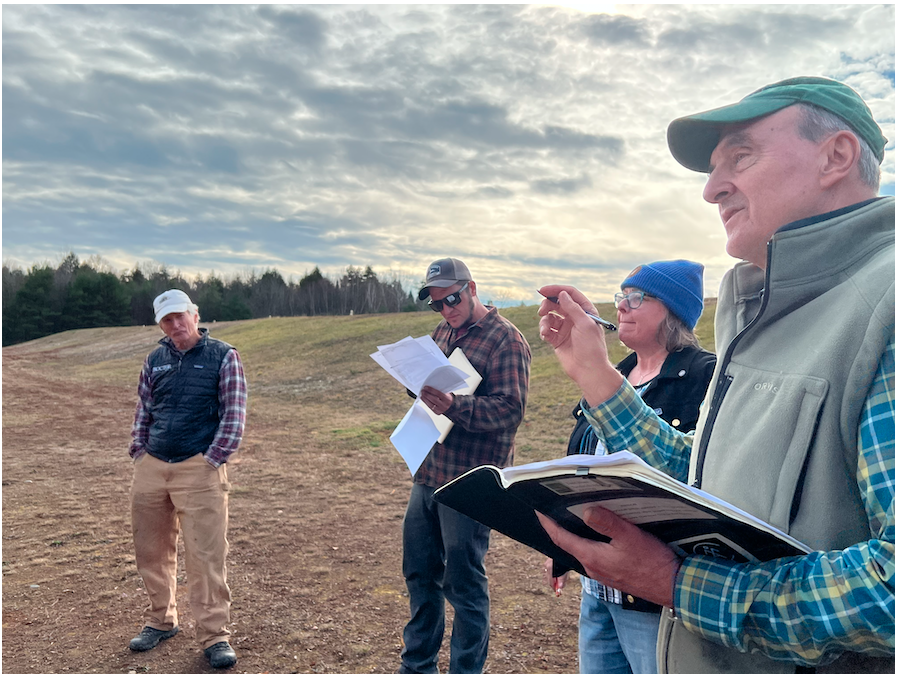 After examining the project, selectman Todd Horn said this is the “best, best, best win, win, win” for everyone involved. Of course, this is just one step, a formal bid has to be made by at least one solar installer, it has to be vetted by the selectboard and then finally everything has to be approved at the March Town Meeting. If all that happens, the array likely would go live by next fall.

Here is why Todd called it a win, win, win. Solar panel prices have dropped so much while electricity rates have skyrocketed. For example, at the town hall alone the monthly bill is exceeding $500 a month. This array offset the costs for that building, the police station, the rec center and the library, plus the costs of all the expensive street lights.

Here is another reason it seems like a great idea: 12 years ago an ad hoc energy committee for the town pushed to get solar panels installed on the fire station and town shed. As the rest of the town municipal buildings’ costs have skyrocketed, theirs have remained, for the supply side of their electric bill, near zero. They are only paying the electric company’s pole, transmission and maintenance fees.

Early projections are that the moment the new array begins producing electricity the town will begin to save money. It also makes the town less dependent on foreign energy suppliers and on big power generating companies far away. Plus it is only the beginning of what is possible.

Before moving here I lived in Marietta, Georgia, which way back in the 1920s decided to have its own power and water company. Today it produces so much income that the town property taxes are miniscule. We might be at a similar point today. For now, we are thinking small, but why not think bigger. It is possible.

Of course, if this were just Sandwich it would be a drop in the big global energy supply bucket. However, Sandwich is not alone. Towns across the state are doing similar and bigger projects. Our state government has been slow footing it, costing us all dearly but with a more enlightened political attitude big things could happen.

Our Sandwich story could well result into even more savings for all of us local taxpayers. Adam Heard, from right here in Sandwich, and Theresa Swanick are running for Carroll County commissioners as a two person team. After hearing our Sandwich story, they took out their calculators to see what could be done on the county level.

The electric bills for the county nursing home, jail and county offices have been close to $400,000 annually and will certainly exceed $500,000 in the near future. Swanick and Heard looked at the Sandwich model and applied it to Carroll County and discovered they could start saving taxpayers hundreds of thousands of dollars in the immediate future and maybe millions spread over the long term. Lower taxes, cleaner energy, less reliance on foreign and far away domestic fuel sources. Wow, that is the best, best, best, win, win, win we all can love.

Leonard Witt is a member of the Town of Sandwich Energy Committee and a founding member of the Sandwich Climate Action Coalition. These opinions here are his alone – and so are the photos.