Posted on August 8, 2022 by Sandwich Climate 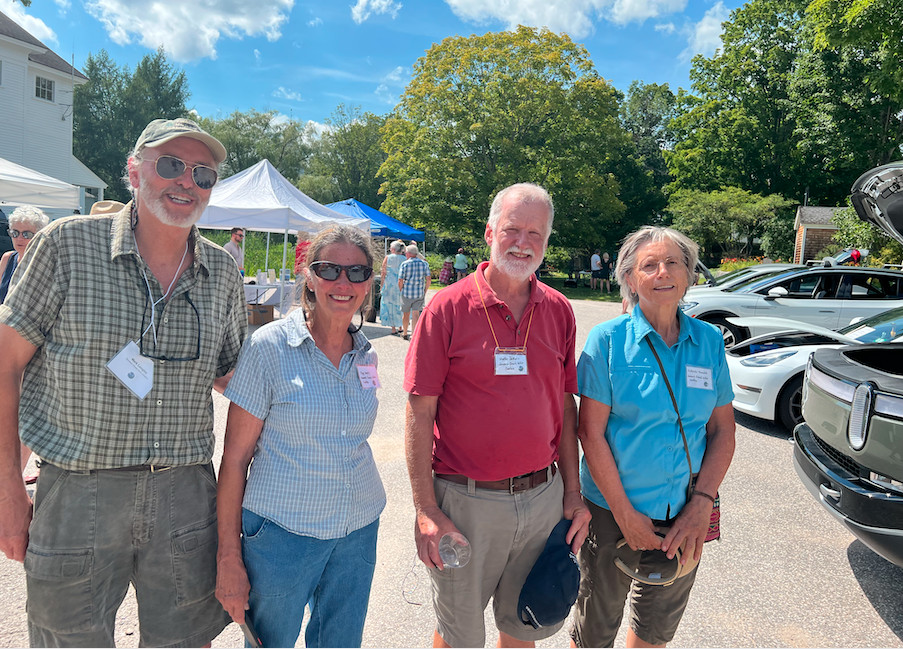 Mark and Peggy Longley, Wharton Sinkler and Katherine Thorndike. Thanks for organizing this historic Sandwich event.

On Sunday, Aug 7, 2022, the US Senate finally passed historic climate action legislation that will likely become law very soon. It will tackle a problem acknowledged as needing fixing by our government for over 50 years.* It was fitting that at the very same time the bill passed, the Sandwich Electric Vehicle, Tool, & Solar Day was being held at our town hall parking lot, providing demos contributed by local and nearby residents showing the power and economic and other benefits of electric cars, pickup trucks, bicycles, chain saws, mowers, weed wackers, snow blowers and more. We are witnessing a very large step on a longer journey that needs to be taken to save the planet, while producing higher paying jobs and lowering the price of energy for heating, transportation and electricity. New Hampshire has been relatively flatfooted in taking advantage of all the new technology, now is the time to join the journey in earnest.

Let’s give credit and thanks to Mark and Peggy Longley, Wharton Sinkler and Katherine Thorndike, all pictured above, for organizing this historic event for Sandwich on this historic day.  Thanks so much.

*This from the New York Times about 50 years ago:

In 1969, President Richard Nixon’s adviser Daniel Patrick Moynihan wrote a memo describing a startling future. The increase of carbon dioxide in the atmosphere caused by burning oil, gas and coal, Mr. Moynihan wrote, would dangerously heat the planet, melt the glaciers and cause the seas to rise. “Goodbye New York,” Mr. Moynihan wrote. “Goodbye Washington, for that matter.”

Fifty-three years later, Congress is on the cusp of finally responding to what Mr. Moynihan termed “the carbon dioxide problem.”