General Motors said Thursday that it would phase out petroleum-powered cars and trucks and sell only vehicles that have zero tailpipe emissions by 2035, a seismic shift by one of the world’s largest automakers that makes billions of dollars today from gas-guzzling pickup trucks and sport utility vehicles. 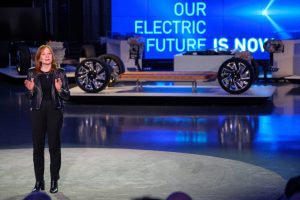 GM plans to become carbon neutral in its global products and operations by 2040 and has committed to setting science-based targets to achieve carbon neutrality. (Photo by Steve Fecht for General Motors)

The announcement is likely to put pressure on automakers around the world to make similar commitments.

The company plans to spend $27 billion over the next five years to introduce 30 electric vehicles, including an electric Hummer pickup truck that it expects to start delivering to customers this year. Currently its main fully electric offering in the United States is the Chevy Bolt, a small car. The company sells several electric models in China.